After Eric Garner, ‘What Shall I Cry’?

A version of this blog was posted previously at The Huffington Post.

It is an unsettling thing, sitting next to a Christmas tree and attempting to put heartsickness into words. Christmas is supposed to be a time of glad tidings and good cheer–twinkling lights, red noses, warm mittens. But under the iconic neon of Times Square stand those grieving the abhorrent miscarriage of justice in the death of Eric Garner. Residents of Ferguson string lights along many buildings still shuttered in the wake of protests stemming from recent events in Missouri.

Yet this morning my thoughts still turned to the Christmas story and the scriptures of Advent. And so I think as well of Joseph, young Mary, and the moments surrounding the birth of their child. I think about being denied shelter and placed in harm’s way. I think of friends and strangers who struggle to parent well, and the added burdens that accompany persons of color.

What does it mean to journey so far only to learn there is no place for you at the table, in the inn, in the neighborhood, in the courtroom? To raise children with the odds stacked against you, only to witness their deaths at the hands of state violence, with no accountability? What does it mean to be a mother and father to black sons and know that they will likely be harassed by police at some point in their lives, or worse? What is there to be said to give meaning to that which seems meaningless? When we can’t breathe? As the prophet Isaiah wrote, “A voice says, ‘Cry out!’ And I said, ‘What shall I cry?'”

Many Christian churches and traditions observe a way of reading and preaching the scriptures called the lectionary. It’s a cycle of readings that provides a chance to encounter almost the entire bible in about three year’s time. (Similarly, Jewish congregations read the entire Torah every year). The theme of this week’s Sunday lectionary text, for the second Sunday of the Advent season, is prophecy and repentance. Churches across the world will read from Isaiah, the Psalms, 2 Peter, and Mark. These texts describe the coming “righteousness of God” and the need for preparation and repentance. But do not be mistaken–these are not texts designed to scare you into behaving lest you end up on God’s “naughty” list.

The Advent season has origins in ancient Judeo-Christian expectations of divine justice. The prophets of the scriptures were not fortune tellers (or scolds). They were cultural and political critics. They couched their indictments of the powerful in visions of the “future,” a careful way to speak back to an empire capable of crushing both them and their people. Often, demands for “repentance” are generally better translated as demands for shuv — a Hebrew term for “turning around”– or metanoia — a Greek term that literally means “changing one’s mind.” When they call for the powerful to repent, the biblical prophets of the Hebrew and Christian scriptures are calling for change, not apology.

Seems rather apropos for where we find ourselves as a nation this week. Perhaps it is divine providence. These particular scripture readings at this particular time. Or perhaps it is simply a weary truth: the arc of progress towards justice indeed bends beyond any horizon in our sightline. And so these scriptures ring true again and again over millennia. Still, like so many voices crying out from the wilderness, prophets have emerged to stand in the face of state violence, police brutality, and sanctioned injustice.

We have seen protesters taking to streets, screens, and social media to speak truth to power. We find, as well, that there is much work left to combat the legacy of slavery and the persistence of racism in this country. We will never truly move forward without genuine repentance and reconciliation–by both those in power and those who benefit directly or indirectly by privileges afforded them. Without this, there are so many parents and caregivers who will continue to fear for their children.

Tonight I’ll travel down to the White House grounds, where I have tickets to observe the National Tree Lighting. On the rear side of the White House, I will watch as President Obama stands with his own family, singing carols and flipping the switch on the National Tree–an act with ancient roots in the tradition of lighting a candle against the encroaching winter darkness.

President Obama has acknowledged that his own children, had they been boys, would likely face the same prejudicial microaggressions and potential violence that Tamir Rice, Trayvon Martin, and Michael Brown fell victim to as youths. Unacknowledged, but equally true, is another reality. Had President Obama’s daughters not been born into privilege, they themselves would be disproportionately likely to experience poverty and violence as black young women.

On the front side of the White House, there will no doubt be protesters attempting to cast their own light into the darkness as well. Chants of “Hands Up, Don’t Shoot” and “Black Lives Matter” have begun to ring as seasonal carols, giving flesh to ancient hymns like “O Come O Come Emmanuel.” Indeed, we all wait with great expectation for what will come, both from within the White House and in our own communities.

The Tree Lighting will be fun and festive. I am looking forward to it. However, the texts from Isaiah, the Psalms, 2 Peter, and Mark push me to recall that casting Advent light in the darkness is not to be reduced to the fun and festive–it is subversive. It is dangerous. It is protest. 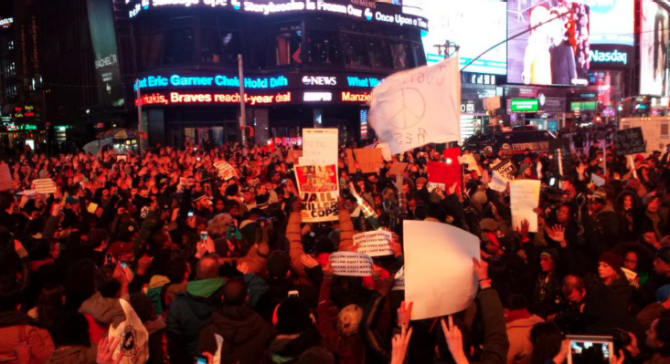