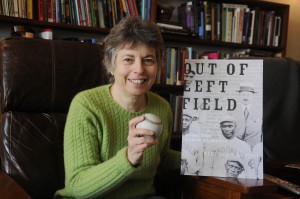 This is a dialogical blog between Dr. Rebecca T. Alpert, Professor of Religion at Temple University and an ordained rabbi, and me.

So here we are a few days after the New York Times article entitled “Same-Sex Interfaith Couples Face Roadblock to Marriage in Judaism,” written by Mark Oppenheimer and published on January 30, 2015.

When I read this piece over breakfast on Friday, my first reaction was: “Wow, so many female clergy have come into their ordained powers but, alas, they seem to have a stronger allegiance to their various religious concerns and traditions than to feminism and gender issues.  And surely, this particular situation presents an interesting twist.  But how in the world did this woman rabbi not jump at the opportunity to marry this lovely lesbian couple?  Yes, I know about intermarriage concerns among American Jews, but still.  It makes me feel worried about women in power being so much the same as the androcentric structures feminists have been so strongly opposing from the beginning!”

I know, of course, that the problem of women clergy being “co-opted” into the status quo is not limited to female rabbis.  To be honest, I see it almost everywhere: in the churches, in academia, in the media, in politics, really throughout history, but throughout history women were not usually in the position to make a difference as ordained clergy etc.  So nowadays, when women succeed and get into positions of power, they are still not necessarily fending for feminist principles.  In fact, some come out on the kyriarchal status quo.  As a professor of the Old Testament, I am currently training future clergy, mostly in the United Methodist tradition, and my guess is that many of my women students won’t necessarily want to stand up for feminist theological work either.  This article brought this fact back home to me, right over my morning tea.

I, too, was quite upset by the New York Times article Saturday, but for very different reasons. I don’t see women rabbis who (let’s imagine for feminist reasons) are willing to do same-sex marriages but not interfaith ones as being “co-opted” by a masculinist power structure.  Like their male counterparts in the liberal rabbinate (many of whom are good feminists themselves), these women rabbis truly believe that they are ensuring the Jewish future by taking a stance against intermarriage.  They would probably argue that this is a feminist position, in that they view same-sex interfaith marriages as equivalent to heterosexual ones, and they won’t perform those either.

I was upset by the article for a different reason. As a (lesbian) Reconstructionist rabbi, who, like many of my colleagues, has been performing interfaith ceremonies for decades—even before I began performing (and writing about) marriage equality—I found the article very one sided.  I worry that it left religiously mixed couples with the impression that they won’t be able to find liberal rabbis who will do their ceremonies, and that’s unfortunate for those of us who believe this is the right thing to do.  Many liberal rabbis perform interfaith wedding ceremonies for the same reason as our non-performing counterparts. We believe that for the Jewish people to survive and thrive in America, we must be part of an open society.  We can’t dictate to people with whom to fall in love, whether that has to do with gender or religion (or race or any other identity factor).  What we can do is encourage people to find their place in Jewish life, and they are more likely to do that if we welcome them (and their partners of choice).

But even if I don’t think this is a good example, I do agree with your larger point. I’ve met many women clergy (Jewish and Christian) who would not call themselves feminist.  They decided to go to seminary because of their love of their religious traditions, not thinking that living in a woman’s body should change how they relate to their traditions in any way.  When I first encountered this phenomenon forty years ago I was shocked and dismayed.  Now I don’t make any assumptions about feminist values, or the bodies in which they live.

I agree with you that we cannot rely on essentialist notions of identity.  However, the lesbian couple in the New York Times article did so.  They went to a female rabbi expecting to get married by her without a problem.  In this sense, our feminist critique of essentialism is not as widely known as it could be.

I wonder about the strategies we should use in order to get the point across that feminist politics is not automatically found in female bodies, perhaps especially not when those bodies function in positions of power, status, and authority.  People get confused about this crucial point.  And they do not only get confused but more than enough people in power, status, and authority take advantage of essentialism to advance conservative politics and to marginalize progressive positions even further.

It seems to me that Mark Oppenheimer, the author of the New York Times article, did the latter.  I am glad you sent him an email message.  What do you think about his response?

I hadn’t thought about why the couple went to a woman rabbi; you’re right that making assumptions about what people believe based on the bodies they inhabit is so very problematic.

When I complained to Mark (whose regular Saturday religion columns I really look forward to because I almost always find them smart and well-researched) about only highlighting the rabbis who won’t do interfaith same-sex marriages and only mentioning in passing the ones who do, he responded tersely acknowledging he should have been clearer. I would love to see him go one step further and devote a column to the liberal rabbis who have the courage to challenge the fears of the Jewish community and support people like the couple in the article.

The truth is that lots of us would be thrilled to do their ceremony, and more than one rabbi has already contacted the couple via social media to offer their services. So in the end, perhaps the article did some good after all!