In my article “When Rahab and Indonesian Christian Women Meet in the Third Space,” published in JFSR 31.1, I spoke at length about the multiple oppressions experienced by Christian women in Indonesia, both within the church and in academic settings like theological seminaries. Through Rahab’s voice I envisioned a world where Indonesian Christian women create a third space where they can work actively and innovatively to resist their oppression.  Homi Bhabha understands the third space as a place where the the marginals can challenge the identity and power relations as the identity and power relations are not fixed but the result of negotiations. Hence, the third space is a place that accommodates the emergence of other positions (Rutherford, “The Third Space,” p. 211). I also envisioned a world where Christian women in Indonesia worked closely with their Muslim friends in the creation of the third space so that together they can promote well-being and justice for all people in Indonesia.

However, one important thing that I did not touch upon in that discussion was the oppression experienced by indigenous women especially by those living in Mollo, Timor Tengah Selatan (TTS) Regency, East Nusa Tenggara. This issue is very close to my heart because I myself was born and raised in West Timor Island, an island that is located quite a distance from the capital city of Indonesia and is among the country’s poorest provinces. This island is also the driest island in Indonesia, being characterized by dry, mountainous areas and a short rainy season. Most men and women are self-reliant and resilient farmers, whose primary crops of root vegetables, corn, and peanuts provide important food safety in harsh ecological conditions. Hence, I know what it means to be poor. I know what it means to live in dependence on our natural resources. I know what it means for my own people when those natural resources have been taken away from us by those who do not care much about my people’s interest and well-being.

The people of Mollo, called Atoin Pah Meto (dryland people), are those who have settled in the southern part of Mutis Mountain Sanctuary, TTS, West Timor. 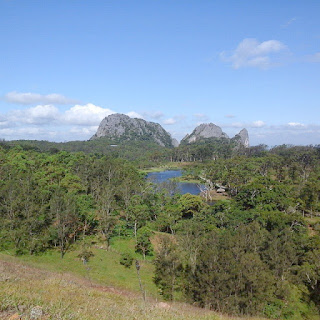 Unlike the rest of the areas in West Timor that are mostly very dry, this area is rich in valuable mineral resources such as marble, manganese, gold, oil, and gas. Mutis Mountain is also surrounded by forests which are critical watersheds for the island of Timor. These natural resources are the source of life for the people of Mollo and are therefore regarded as sacred.  Since the Mollo women in particular are responsible for all of the work at home, it is their job to ensure food security for the family and community. They do so by gathering food and medicine from the forest, growing crops in the fertile land, and bringing home fruit and roots from different plants for natural dyes which are used for their weaving  – a traditional skill that defines Mollo women’s identity.

The majority of Mollo women embraced Christianity which is a monotheistic religion. However, traditional indigenous spiritual beliefs and practices have persisted to the present and are combined with Christianity. One of the indigenous spiritual beliefs in Mollo relates to a basic philosophy drawnfrom cultural values or local wisdom that sets a holistic notion of the interconnectedness of people and other elements of the earth such as plants, animals and nature. Mollo women believe that “The soil is our flesh, trees are our hair, water is our blood, and stones are our bones. Nature is like the human body.”  This belief shows how nature, which takes the form of stones, trees and water, has become the symbol of the Mollo people’s identity. Any attempt to destroy nature, therefore, would mean a destruction of the Mollo people’s livelihood.

However, the interconnection between the Mollo people and their environment is slowly being undermined by the presence of mining companies whose main agenda is to extract as much marble as they can under the permission of our local government. As a result, the majority of farmers were forced to switch to mining as land was converted from small farms to mines. Many women and children have been forced to get involved in mining activities in order to meet their food needs and to pay off their debts, even though these activities endanger their lives. The presence of mining companies in TTS has also resulted in massive environmental damage, destroying soil, forests, water, and air. Mining financially enriches only a very few people but afflicts so many, with those people living near the mine generally remaining poor.

In facing this situation, Mollo women have refused to give in to their suffering and give up. Instead they have formed a women’s coalition which is aimed at protesting the mining interests and the local authorities who benefited from these mining activities. This coalition has been led by a homemaker named Aleta Baun, who began her attempt to reach out to other Mollo women to fight together with her by going from house to house and village to village in order to gather as many women as possible to join her in the protest. In her quest for support, Baun has used her local belief that environment is a part of their livelihood without which they cannot survive to persuade many women to take action in resisting their oppression. She has also highlighted the importance of saving the forests that provide for their weaving – the symbol of their identity. Baun also managed to get support from men by emphasizing the importance of women to be on the frontlines of the protests and acts of negotiation. Using the cultural understanding that defined women as more nurturing, intuitively spiritual, and closer to nature, Baun convinced the men that it is better to put women at the forefront of the campaign because women are the ones who need the forest to survive. Moreover, women would be less likely to become involved in conflicts or clashes with the mining companies as they are considered more patient than men and would use their intuition and sensitivity in conveying their demands. This argument sat well with the men who in turn allowed their wives, sisters and daughters to form a peaceful protest, starting in 2006, in which about 150 women sat on the marble rocks at the mining sites, quietly weaving their traditional cloth, their identity symbol. They did it for about a year. As a token of their support for their women’s struggles to claim their rights to the land, the Mollo men did something which is unusual in Timorese culture. They helped out by doing women’s tasks at home – cooking, cleaning, and caring for the children. The Mollo women’s act of resistance was not in vain. In 2010 the mining companies left the four existing mines in TTS. Of course those mining companies are long gone, however, I feel the need to bring up this issue again as the challenge for the local community to repair the damage that has been done remains a serious concern. Moreover, our local media recently reported the decision of the governor of East Nusa Tenggara to issue 315 Mining Business Licenses for several mining companies to operate in East Nusa Tenggara. One of the mining companies that received the license is So’e Makmur Resources (SMR) mining company, which although has yet to officially start its mining activity but has promise to build and repair roads, build churches and school, and provide clean water and jobs in order to appease Mollo community. However, Baun and Mollo women have taught us that the presence of these mining companies may create social havoc, violence, and deep divisions within communities and families.

The bold decision of Baun and the Mollo women to take a stand and actively speak out to protect their land is an important step for entering the third space of enunciation where they can acquire power to resist their oppression and contest capitalist power to harm their land. They do so by using gender roles which, in the past, have restricted their movements to the domestic sphere and twisted them so that men will allow them to enter the public sphere where they can initiate a peaceful protest against the mining companies. They also use their spiritual belief that considers the interconnectedness of human beings and nature as an important foundation and driving force to sustain their struggle to protect their environment.  Hence, this third space is “a safe space in which women can become powerful, dynamic agents of change in their worlds and can reconstruct their identities; it is a space wherein marginality becomes ‘a site of radical possibility, a space of resistance.’” (Mangililo, “When Rahab and Indonesian Christian Women,” p. 64).

Ira D. Mangililo is a lecturer in Hebrew Bible and Feminist Theologies at the Faculty of Theology of Satya Wacana Christian University, Salatiga, Indonesia. She holds a Ph.D. from the University of Wales, Trinity Saint David, Lampeter, United Kingdom. She can be contacted at [email protected] or [email protected].